This article was an infographic. If you’re not familiar with the term, it’s basically a picture or diagram with “callouts”–little blurbs of text describing things in the illustration. They’re entertaining and informative. Rube Goldberg was the master of the infographic. Often, a writer and an illustrator will go back and forth (through their editor) with each other’s processes. Editors don’t want illustrators and writers talking to each other, though. Writing and illustrating involve very different creative processes, and you don’t want to mess with that.

My original pitch was about artificial reefs: ships and other objects that are sunk on purpose in relatively shallow water near land. These shipwrecks become coral reefs and provide places for recreational divers to explore without damaging nearby natural reefs, not to mention providing new habitats for reef organisms. Often, the objects that are sunk have some artistic or historical value.

I’d never written an infographic before, so I went to my local library and looked at back issues of ASK. Most infographics consisted of an introduction and a bunch of callouts, some with closeups of what was described. So that’s what I produced: a gen 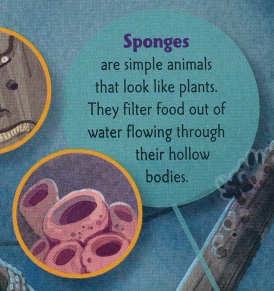 eral overview of what happens when a ship sinks and critters take over, then a (very!) short paragraph on each critter that I found fascinating. The editor sent it to the illustrator, and she made a sketch that completely changed the structure of the article.